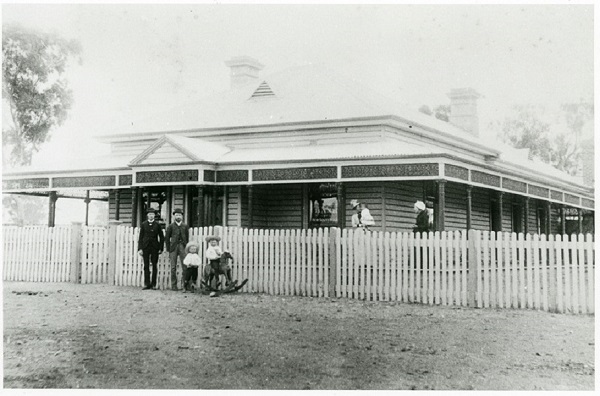 The story began in 1889 when a Single storey wooden building was erected on this site for the Bank of New South Wales. The Architect was G. Sheppard of Wagga and the contractor was Mr Hardy. The total cost of the project was £1181/18/1 and consisted of the Banking Area, Manager’s Office, Strong Room, 6 private rooms & Kitchen. 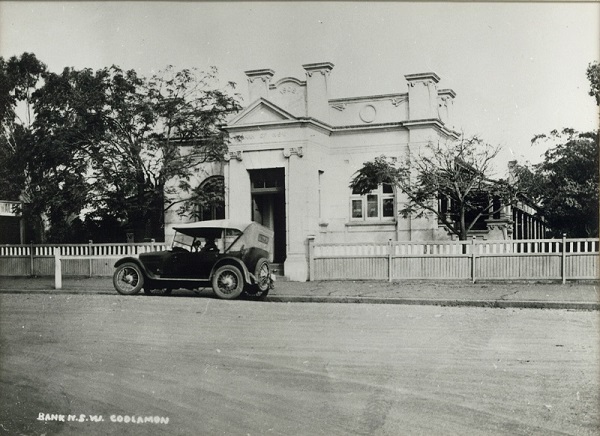 During the winter of 1908 the front half of the building was pulled down and a new brick facade was erected to give the building a more commercial appearance. This addition as well as some renovations of the rear part of the building was done at a cost of £917.
In 1982 the Bank of New South Wales changed it’s name to Westpac and they ran a few adds to promote the change. By chance I came across this one featuring our building at the end of this one on YouTube

In 1998 the bank finally closed it’s doors and the building was bought by John and Maryanne Haslam. They spent a considerable amount of time and effort to convert it into a bed and breakfast. The main banking room was changed with an additional room and en-suites added. As well as this the 2 self contained cottages, garage and an extension with a kitchen and family area were added to complete the current picture.
The Bed and Breakfast was opened in 2004 as “Nanna Moloney’s Bed and Breakfast” and featured on Channel Nine’s ‘Getaway’ program. A small cafe ‘Josh and Me’ was also run from the main dining room.

In Jan 2008 we stumbled upon this hidden treasurer by accident while visiting some friends in town. We immediately fell in love with it and tried very hard to purchase the property but unfortunately were unable to do so at that time. The Bank was eventually sold to Neville and Helen Male and they renamed it “Sweet Briar” continued to run it as a bed and breakfast for the next 3 years.
On doing a random internet search in December 2010 we discovered it was for sale again. We decided it was worth trying again and eventually we were successful in securing the sale. It was a big ‘tree change’ to make but one that we don’t regret for a minute.
Since then we have set about putting our own mark on the property with substantial improvements to the buildings. We are gradually improving the gardens and general feel of the property.
We feel very privileged to host guests that pass through Coolamon from all walks of life.